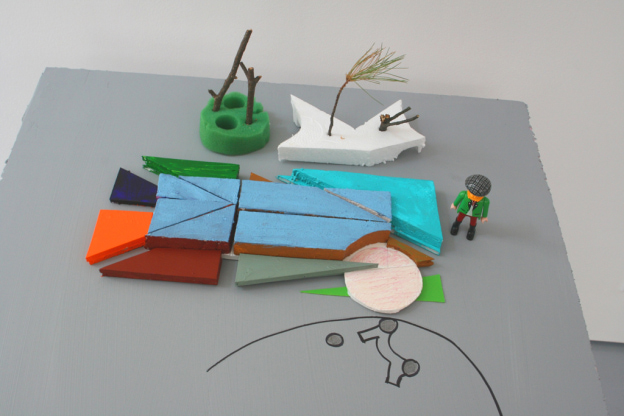 In 2007, in association with the teachers and activity leaders, the parents of pupils commissioned a work for the school yard to promote sensory experiences, meeting and exchange for children between three and ten years old. The sculpture should be capable of embodying some of the school’s founding ideas: a spirit of tolerance, curiosity, openness to foreign languages and cultures.

Jessica Stockholder’s proposal comprises a “workable” sculpture made in bright colours and varied materials: marble, wood, Corian, concrete and brick. It is composed of a set of geometric forms of low height that unfold and are organised around a central point covered by a rectangular structure in plasticized sheet metal. This structure can act as a space for play/ self-staging, and shows volume and passage. The floor drawing in aluminium near the red marble disc, as well as the shape of the larch planter, take elements from the Occitan cross. “The Occitan cross is quite abstract in the work,” writes Stockholder. “I’m responding to the fact that it wasn’t present anywhere in the school when I visited it (…).”

The Calandreta Còsta Pavada school could not finally accommodate the work. It was agreed to donate it to the town of Toulouse and to install it in the Musée des Abattoirs hemicyle, near the educational workshops/ studios. 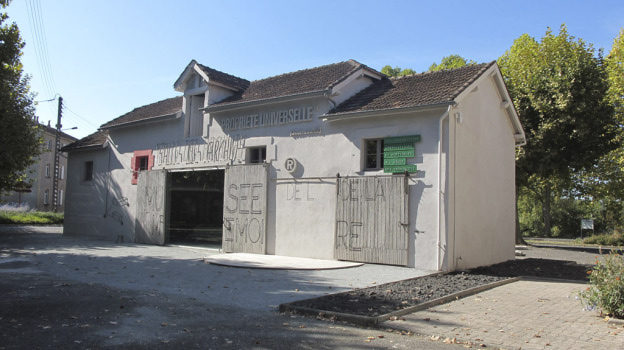 Before it was a mining town in the 19th century, Cransac was a village known for its hydrotherapy. After the mines closed in 1961, the city became a spa town again, but collective memory remains tied to its mining past. Changes in landscape and social behaviour are thus essential ideas in Cransac’s recent history.

By using an artist, the patron wanted to go further than commemoration. If the consideration of industrial and mining history remains important, the articulation of past and present must show new concerns related to thermal activity and the evolution of the urban landscape.

The town chose internationally renowned artist, Joëlle Tuerlinckx. From the outset, she became interested in the context of the intervention. Her meetings and discoveries (human, geological, architectural) were recorded in notes and are the subject of audio and visual recordings, the ensemble constituting the genesis of the work.

Joëlle Tuerlinckx develops a project that evokes the entire museum structure and its function: the collection, conservation, inventory, presenting successive exhibitions. But she overturns its schemes and proposes a “museum turned inside out like a glove” based on a triangular of places.

The Cransac Triangular, “Memory Museum – Universal Property ®” consists of the Memory Monument, 34 metres high, erected on the old mine pit head, near shaft No. 1 (the monument represents one 10th of the shaft’s depth) and of two sites designated by the artist as the Memory Museum Vitrine Historique and Vitrine Contemporaine (Historic Window and Contemporary Window).

The title given to the work pays homage to Jean Jaurès: “Universal education, universal suffrage, universal property, that is, if I may say, the true postulate of the human individual.*” The artist retains the universal spirit and utopian dimension of Jaurès’ words. 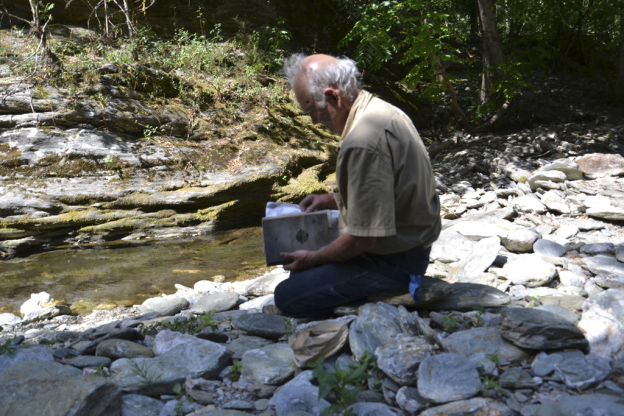 The village of Lamelouze, situated in the Galeizon valley north of Alès, is part of the Cévennes National Park. Many professional and cultural associations are located there, with whom the municipality keeps a close partnership.

In 2009, the commune invited the Sentiers association to carry out artistic experiments on 14 hectares of communal land, situated between the 11th century church of Sainte-Cécile and the Galeizon river. The former landowner had begun a forestry operation and created an arboretum.

On the initiative of several residents, the Sentiers association and the Lamelouze Commune asked Georges Trakas to design a practical work for this space, which offers the only public access to the river. The request is part of a desire to enhance the land and its landscape, and its quality as a common space in the geographic and social organisation of the commune so that it is “recognised” by all – Lamelouze residents as well as occasional users.

After a visit in August 2015, George Trakas wrote, “I felt the project was destined for me. The commission appealed to me and it was right, because I fell in love with the locals and their history.”

During a second stay during summer 2016, acting on his initial intuitions and observations, George Trakas proposed a path to access the Galeizon as well as a simple installation between the arboretum and the river.

A study book combining texts and drawings was published by Captures éditions. It retraces the artist’s reflection – related to his career and works – his approach guided by the human dimension of places. The selection of George Trakas’ drawings and technical data for the creation of Du sec à l’eau  (Dry to Wet) offers a pragmatic and poetic approach to the commissioned work. 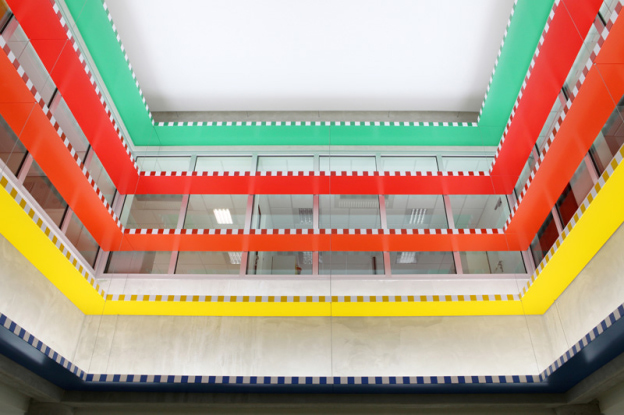 A work for the Purpan site – Hospital Complex
Toulouse

Several years’ ago, Purpan hospital began a complete overhaul of its site by opening several establishments between 1990 and 2006 and the arrival of the tramway at the end of 2010. The construction of the Pierre-Paul Riquet clinic and the Urgence-Réanimation-Médecine building is an opportunity to commission a work from an artist. The central concern is the question of hospitality. Emphasis is placed on the need to identify flows for hospital users, to organise the passage to the interior from the tramway stop and to reflect on the halls while developing a common identity for the two buildings.

After an observational phase looking at the sites and their uses, Daniel Buren chose to concentrate his intervention on the URM and PPR reception halls, and on the bridge that connects the two buildings.

Inside the patio, three square three-dimensional frames spread out from the street-side façade, accelerating the perspective. Blue, yellow, red – each one is connected to a second on an open angle equal to that formed by the two glass walls on the street side (hall entrance) and corridor side (access to other services). The four frames opposite the windows are projected and laminated onto the windows with white adhesive strips.

The square space inside the entrance hall with its series of windows is worked in volume: Blue, yellow, orange, red and green tablets, punctuated by white stripes highlight the square form and follow one another up to the ceiling of this empty space. These five frames, superimposed on one another, like light boxes (each illuminating the upper box), become the main lighting for the Pierre-Paul Riquet Hospital entrance hall.

The bridge that links the Emergency Services building to the Medical Imaging Department (situated at the heart of PPR) is used to indicate the flux between the two spaces. The windows are entirely recovered with self-adhesive paper and divided into sequences of 43.5cm width, successively blue, yellow and red, then composed of 5 alternating strips (white and transparent) of 8.7cm.

This large frieze diffuses its coloured light into the passage used exclusively by patients and caregivers. It is visible from outside day and night (on the tramway side and at the back of the buildings) like a kind of luminous horizontal lantern. 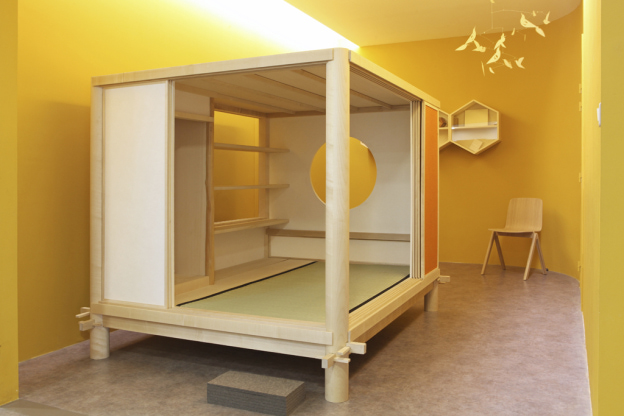 “An artist could invent a work for the children that we receive to introduce a minimum, vital, of disorder that provokes thought.” The Medico Pyschological Centre for children and adolescents ­– independent of the hospital – is an interface of social ties and the psyche, of the social and clinical subjects: A place of circulation and of interception of flux from the vast world, of suspension also…The waiting room appears as an intermediary space between the treatment itself and the outside world, officiating like these anti-chambers where one whispers before speaking. To think of a work for the CMPEA would be to allow children who are dealing with digital technology too soon and too much – often impoverishing thought – an unedited emotional and intellectual encounter.”

Washitsu or Cabin in Time

Sculpture with dismountable architecture in wavy maple. Installed in the current waiting room, it compliments Meuble-spirale (Spiral Furniture). Its minimal conception around the unit of a tatami (rush-covered straw mat forming a traditional Japanese floor covering) creates a unique space for the child. It is based on the attentive observation of the Japonese washitsu tradition, from which the artist sought essential form, with a single module….To preserve the spirit of the place ­– tokonomo – or the space for art – shoji –sliding doors in wood and Japanese paper reinforced with, here in felt, removable shutters.

Placed in the reception area, the Meuble-spirale (Spiral Furniture) aims to transform and be placed freely in the CMPEA location. Both a piece of furniture and a sculpture, hexagonal in shape, it is made out of fourteen mobile elements with colourful sides, with multiple, playful uses: library, drawing table, little theatre. The work is open to appropriation by its users; it is an invitation to creativity.

Similar to the Meuble-spirale at life-size scale, L’objet-étalon is composed of fourteen autonomous elements. The idea of the scale is to be able to think with the object in your hands, of all sorts of combinations applicable to the furniture-sculpture. It is created with fourteen types of wood: refer to the colour chart for positioning the sides of the Meuble-spirale according to colour.