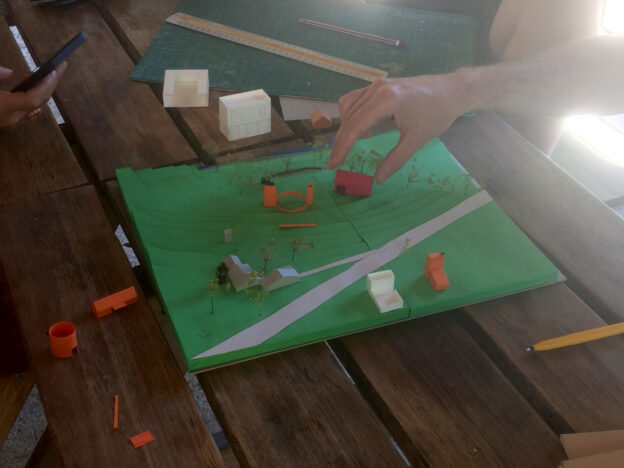 The Big Top is an artwork linked to Riez’s historical Roman heritage and is a place that will be used to host artistic and cultural events: theatre, dance, cinema, music, conferences and meals.

Its annual operating will be linked with the Cercle des Oiseaux activity in partnership with Le Moulin à Projets, an association created in 2018 to create a living space inspired by the La Borde psychiatric establishment founded by Doctor Jean Oury. Le Moulin à Projets provides a home and structure for adults who no longer need psychiatric hospitalization, but who nevertheless need support in everyday life.

If The Big Top and the Food Truck (operating in July and August for the past two years) are the structural elements of the living space, The Big Top is also a social tool for Riez’s inhabitants and neighbouring municipalities. As such, it must be mobile and easy to dismantle at a reasonable rate.

In the Durance valley, water management has been a factor in economic development, mainly in the agricultural domain, and developments linked to this activity have shaped the landscape considerably. This shared patrimonial asset is, however, unknown to the majority of the region’s inhabitants who consider it natural and acquired, forgetting in particular that these gravity irrigation canals contribute to the aquifers used for drinking water and, locally, for watering gardens.

The challenges of the commission:
Beyond communicating the existence of a patrimony and its impact on the present, members of the CED (Durance Executive Commission) and ASA (s) (Authorized Irrigators Trade Unions) wish to highlight the positive resonance of a truly united network of professionals acting with regard to the wider public good.

The purpose of the commission is to make the entire local population ­– particularly the younger generations – aware of the joint challenges of agricultural activity, drinking water and landscape heritage. The ecological richness of this region is created by the presence of water and functioning canals: These artificial structures are continually maintained and perfected to minimize risks. In a period of climatic change, collective water management sets an example in terms of impact, whether in rural or urban areas.

Commissioners: ASA(s), Manosque and Carpentras are the active monitors of the commission with other ASA(s) volunteers, accompanied by Jerome Grangier, former president of the CED and farmer in the Bouches du Rhône, Denix Baudequin and Patrice Devos, General Engineers for bridges, waters and forests. 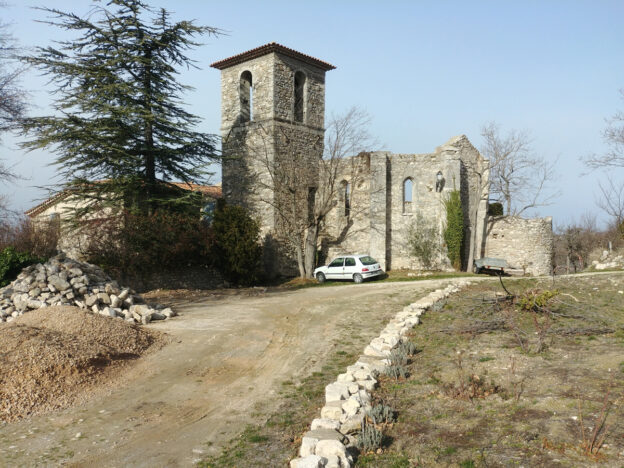 15 kilometres from Manosque in the Luberon, the village of Montjustin has a unique history. Lucien Jacques, a friend of Jean Giono, rediscovered the village in the aftermath of the Second World War. Montjustin was revived through the poet, who settled there, drawing artists and friends in his wake.

Today, two thirds of the 52 residences are permanent. Monjustin’s story continues to be a story of friendships. Collective life exists ­– in 2013, a communal café association was created in the old school with the prospect of a cultural programme – a brewery opened and three farms are still in operation.

In 1989, the alienation of spaces considered public was badly received. In 2014, the municipality pre-empted a piece of land in the heart of the central block which adjoins the town hall to build affordable housing and recover space situated at the top of the village, near the old church that is now a location for cultural events.

With this purchase, the municipality wishes to:

– Reflect on the realization of low and medium income housing, modular housing units, and establish mutual use of a boiler room that exists on the block.

– Revitalize the space formed by the former presbytery (property of the municipality) that is currently rented out, a private dwelling, and the church. For the patrons, the approach must be exemplary: action to safeguard the spirit of the village and its collective and friendly tradition in an environment – Le Luberon – where demand for land is high.